Hathaway's character, Unicycle Man, is our protagonist. In the first shot, he is riding his unicycle and wishing that he could bring more art into the world. But all he has is this unicycle and his dreams.

Later, Unicycle Man goes to sleep, wishing there was a way to make his dream come true.

He begins to dream, and soon he realises this is not a dream like any other.

A strange divine entity (from my sketches) appears to Unicycle Man and tells him that she has heard his prayers, that his unicycle heart is pure and that she will help him fulfill his dreams.

Unicycle Man awakens with a fright, not fully understanding his vision. When he looks around, he sees a strange little idol (another one of mine) knocking on his window.

The idol is holding an Amazon delivery box and asks the protagonist to sign for it, and hands it over to him.

Unicycle Man reluctantly accepts the mysterious package, and the idol disappears. What even is Amazon anyway? (I assume this idol exists outside of time so it's not totally impossible and space but I don't think there's much of point trying to make sense of this at this stage)

He places the parcel on the floor carefully, not sure what to do with it. It appears that there is something moving inside it.

Suddenly, the package bursts open and a strange goopy substance appears. It seems to be alive, and says its name is Sugar Blob Man (Jin's character). Unicycle Man is stunned, but at this point he is just willing to see where this goes.

So the two sit down and have some candlelit afternoon tea (is that a thing?) and start to get to know each other. Unicycle Man shares with his new friend his dreams to bring more art into the world. Sugar Blob Man doesn't speak human language and just makes strange sugary sounds, but Unicycle Man seems to understand him perfectly. The Sugar Blob Man shares that he has been alive for centuries, since no matter how much sugar he expels from his body, it never seems to run out.

When his tea has cooled down, Unicycle man takes a sip and discovers, with some disappointment, that it is too bitter for his taste. Thankfully, he realises, his newfound friend is entirely composed of sugar, so he asks him to borrow some of his sweet flesh.

Sugar Blob Man is more than happy to oblige, and projectile spits out some sugar directly into his tea. Unicycle Man is kind of disgusted by this, but he doesn't feel like his friendship with the sugar creature is quite at the stage where he can express that disgust quite yet. So he doesn't say anything about it and tries to act like it's normal.

He takes a sip of his sweetened tea.

Suddenly, everything becomes clear. This is the most incredible flavour in the world. He has never felt more alive. Unicycle Man falls into a psychedelic vision of art and sweets.

Snapping out of it, he stand up and slams his hand on the table. He know what to do, and he has a plan. Surely everyone in the world must try this incredible taste. Sugar Blob Man is intrigued by this, perhaps some recognition from the public will affirm his existence and soothe some of his existential anxiety which has been building up for years. This alliance was blessed by deities and was meant to be.

Unicyle Man and Sugar Blob Man become business partners, and discuss how to get their product out into the world. The shot transitions into a montage sequence.

They begin as humble street vendors with a few frequent customers.

Soon they have their own shop on the high street, become more and more popular every day.

Until finally, they have become a giant corporation, the ultimate achievement. But this was never Unicycle Man's true desire.

The protagonist sits in his shiny office, reflecting on his accomplishments and thankful to all the strange events and creatures that got him here, and brought him to his best friend and companion, Sugar Blob Man. It is time he makes his true dream a reality.

It appears that he does not even need to bother seeking out pieces of art. The sugar is so incredible and popular, that artists and collectors everywhere are giving away their art for some of the amazing product.

Unicycle Man can finally see his dream shaping up. It's all really happening for him. He has all the art he could ask for, as he has always dreamed. But where to put it all.

And this is how the Tate Britain first opened. The end. 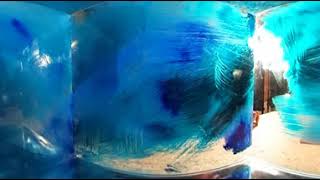 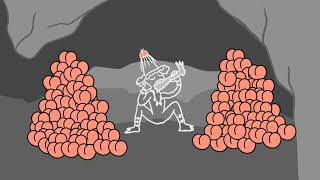